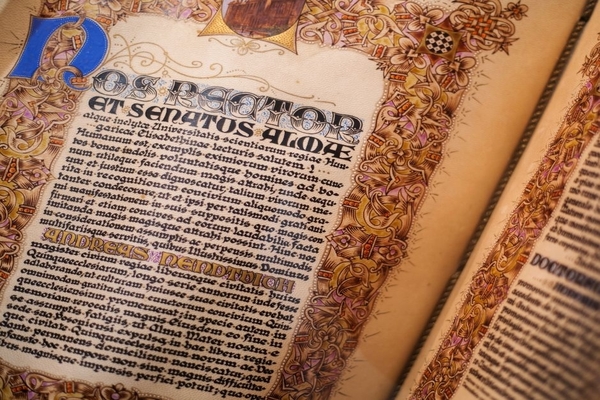 If you are a foreign university student studying in Pécs, you probably got into the city by March; you know the main attractions, popular clubs and pubs, the main transport routes and the best shops. However, you certainly do not know the first public library in Hungary, hiding in the little street behind the Mosque on the main square, with its unique collection and impressive interior spaces, where you can sniff into the air of old times. Now we’ll show you this wonderful place to take its reputation in the world.

The University Library Network of the University of Pécs has many units, and its faculty libraries have branches in several cities of Transdanubia. The most special, however, is hiding here in downtown Pécs, behind the Mosque of Pasha Quasim. The first public library of Hungary—operating in the elegant classicist building of 3 Szepesy Ignác Street—was formed by the book collection of the 18th century Bishops of Pécs to the Department of Historical Collections by the beginning of the 21st century.

The first significant collection was created by Bishop Zsigmond Berényi; his three thousand volumes were mainly theological, legal and historical works. The golden age of the library began at the time of the bishopric of György Klimo (1751-1777), who, besides his palace, erected a separate wing for the library, purchased Berényi’s collection and the thousands of volumes of the Cathedral chapter. The goal was to re-launch King Louis the Great’s medieval university. His agents throughout Europe purchased the most significant theological, literary, philosophical and historical works of the 18th century, preparing for the university to be set up. 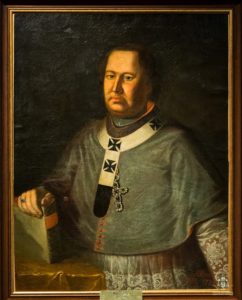 He created a paper mill and a printing press, called scientist priests to the diocese who could have been professors at the university. This is how József Koller got to Pécs, who completed the catalog of the Klimo collection, and searched the documents of the medieval diocese of Pécs in Rome. Based on these, he wrote the history of the diocese of Pécs in eight volumes.

In 1774, Klimo made his library public, so even though Maria Theresa did not grant permission to establish the university, the bishop put the collection at the service of the public. Moreover, the institution could be visited by anyone, regardless of their origin, the only condition for use was the ability to read and write. The opening to the public and the rules of contemporary library use are recorded by a marble table in the lobby of the building.

After half a century, the Bishop was once again a person, who considered the library to be important. Ignác Szepesy (1828-1838) was a scientist himself, cultivated and patronized the sciences. Although he was not able to win the case of university founding, he succeeded in another direction: he launched the Bishop’s Legal Lyceum, whose library building was designed by József Piatsek. In 1832, the Klimo collection was also moved into this building. The books were placed in a strange way: according to their bindings, the most ornate, gold-plated volumes were placed in the Golden Hall, and the works in the white-coloured parchment were placed to the so-called Membrane Hall. Between these two was the former ornamental hall, named after Bishop Szepesy, in which his collection was located. There are specialties on the shelves like the most fashionable magazines of the Reform era, e.g. the associated tracks of Athenaeum and the Scientific Collection; works by Ferenc Kazinczy and Benedek Virág. On the shelf of Szepesy Hall there is a work on the Hungarian transport case, with the handwriting of István Széchenyi, the greatest Hungarian, dedicated to Bishop Scitovszky.

Due to the reorganization of the library, a new catalog was needed, so the author’s alphabetical and thematic handwritten catalogs were created in six folio volumes. The hard work of its authors made it possible for the desired books to come into the hands of the readers. The richness of the collection, its special pieces and its extraordinary arrangement attracted a large number of visitors to the Klimo Library as early as the 19th century; Palatine József was also among the famous guests.

It was a turning point in the history of the Bishop’s Library, when the Elizabeth University moved from Bratislava to Pécs in 1923 due to the post-world war changes. Bishop Gyula Zichy gave the building to the perpetual use of the university, as well as its 35,000 volumes and the seven thousand volume collection of the Cathedral chapter. In this way, György Klimo’s dream was realized and his library was finally used by university citizens.

Most of the books are in Latin, many in German and Hungarian but Italian, Armenian, Sanskrit, Russian and Arabic publications are also present. The collection includes some real specialties such as the eight codes, the two hundred and fifty antiques, the medieval diplomas, the Vizsoly Bible, the manuscript of Sebestyén Tinódi Lantos, and the earth- and sky globe of a Dutch master from 1700. The stock catalog—of course—is now available digitally.

In connection with outstanding events and people, exhibitions are held from time to time in the premises of the library, which serve as an impressive venue for wedding photography as well and we join every summer to the Night of Museums event series.  The requested materials are prepared for our guests arriving for scientific research on the basis of a preliminary application.

4 thoughts on “If you are studying in Pécs, you have to see this special library!”